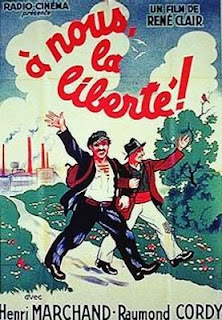 Directed by: René Clair
Starring: Henri Marchand, Raymond Cordy, Rolla France
Rating: 4.5/5
In René Clair's social satire "Freedom for Us", two convicts plan an escape from prison, where they are "forced" to work on a conveyor belt, assembling toys. The escape doesn't go as planned and only Louis gets out, Émile sacrificing himself for his friend. On the outside, Louis quickly gets a business started and becomes a pretty important industrialist, although he is not respected by his new friends in the bourgeoisie. He encounters Émile when he gets out at last and tries to help him get a girl to fall in love with him (one of Louis' employees). But things start to go bad when other former convicts appear out of nowhere and blackmail Louis. 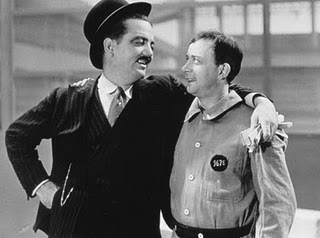 Although it deals with important themes and it is made during a recession, the movie is a comedy, which relies on elaborate set pieces, slapstick and music, rather than dialog. In fact, it could almost be a silent movie and the fact that it owes a lot to the work of Chaplin is obvious (although it was Chaplin that was accused of plagiarizing "Freedom for Us" in his 1936 masterpiece, "Modern Times"). But Clair does bring his own touches. The camerawork is outstanding throughout the entire picture and there is a real intelligent use of the editing. The plot is rather weak and it serves mostly to make fun of certain parts of the high society, but otherwise the movie falls quite nicely around it from one set piece to another. The most famous moments in the movie are the sequences that depict the workers in Louis' factory, who work in conditions very similar to those in the jail at the beginning and the speech towards the end, when we see a politician's monotonous delivery of a boring and pandering address to the workers, while all the "listeners" are distracted by the money from a dropped suitcase.
You can call "À nous la liberté" naive and you may complain about the dialog and the poor storyline. But it's a comedy tour de force, carried by the impressive performances of the two leads, assisted by the wonderful music of Georges Auric and very ably "conducted" by René Clair, a young but mature director even at the time.