One Way Boogie Woogie/27 Years Later
(USA, 1977/2005)
by James Benning
”One Way Boogie Woogie” was James Benning's first feature-lengh documentary. A filmmaker that was to become famous for his static shots and contemplative attitude towards both the urban and the wild landscape seems to have created an almost unique style from the beginning of his carrer. The film is composed of 60 different static shots taken (of about a minute in length each) taken in the city of Milwaukee, Wisconsin, his hometown. Twenty-seven years after the making of ”One Way Boogie Woogie”, Benning returned to Milwaukee to do a film simply called "27 Years Later", in which he recreated every shot of the first movie in the same locations (more or less affected by the passing of time) and even kept the same soundtrack. 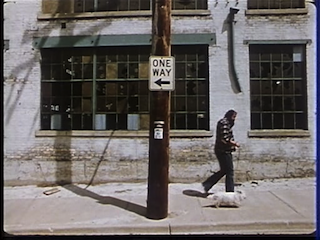 The first movie derives its title from a Piet Mondrian painting, Broadway Boogie Woogie, an abstract network of red, blue, yellow and grey squares that suggest the rectangular disposition of the streets of Manhattan and its colorful night life. James Benning changes the ''Broadway' to a 'One Way' and, indeed, his movie adopts a more monotonous tone, but it's in no way a simple film. Nor is it a boring one... "One Way Boogie Woogie" doesn't just take its title from abstract art, it also is, in many ways, a work of abstract cinema. Benning's compositions, that use telephone poles, fences and objects of various shapes to break the frame into rectangles, that take advantage of the most strikingly colored buildings and that sometimes show us real people engaged in absurd/not-ordinary situations, all look almost like abstract paintings. Adding the movement withing the frames and their succession, Benning takes us beyond the seemingly simple reality he depicts. 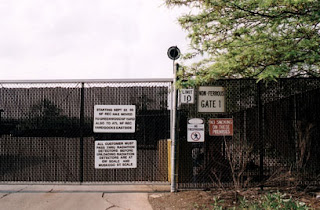 Even more than that, in "27 Years Later" - as I've said before - he recreates each shot from "One Way Boogie Woogie", but he keeps the sound from the first movie. By the time he made the second movie, Benning had already made several movies in which he investigated the relationship between space and memory, most notably in his 1995 film, "Deseret" (no, it is not a type-O). Furthermore, the two movies put together (as they usually are when they are being screened nowadays) are a dynamic portrait of Milwaukee. It sometimes feels that Benning accentuates the decay and the downfall that the places he had filmed almost three decades before. I don't think (but I don't know either if) this is a fair portrayal of the Milwaukee of the present and it is the only thing I don't appreciate about Benning's double feature. 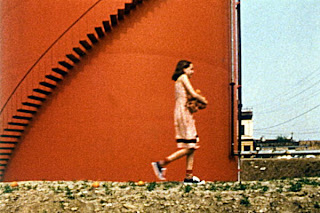 But nevertheless, the two films are unique in the history of American documentary. "27 Years Later" is not a remake of "One Way Boogie Woogie" made by the same director, not is it its sequel. It takes the origianl and gives it other meanings. The two movies are not just two very well made visual documents, but a meditation on the passing of time and a exploration of the possibilities and meanings of cinema itself.