Jovana and her husband Luka live in an isolated, rocky landscape. Their apparent peaceful life is ruined after several characters intrude their privacy, including a strange procession that leads a yound man to the gallows, an old man with a much younger wife that seduces Luka, a mysterious stranger (that turns out to be the brother of the man that was hanged) and many others.
The film has surprisingly little dialogue, the story being told mostly through camera movement, lighting, a unique sense of narrative pacing that keeps the audience focused and, most importantly, the performances, that achieve so much with so few words. Merima Isakov in the title role is an amazing screen presence. She inhabits perfectly a character that undergoes several transformations without understanding then very well. 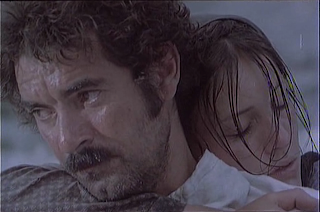 The movie juggles between two themes: spirituality (or religion) and eroticism. There is a strong subtext about inter-faith and inter-ethnic conflicts that underlines the story, but towards the surface there's a very sincere and relatable story about Jovana's discovery of her own sexual identity. Near the end of the picture there's a scene that should be a milestone in the history of cinema: as Jovana lets loose and leaves all inhibitions aside, she breaks into a sensual naked dance at a Gypsy/pagan party.
"Jovana Lukina" is a wonderful exaple of uncompromising Balkan cinema and a discovery waiting to be made.