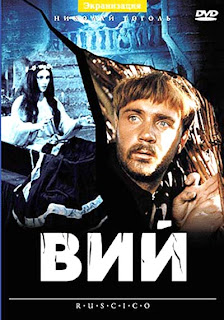 Directed by: Georgi Kropachyov, Konstantin Yershov
Starring: Leonid Kuravlyov, Natalya Varley, Aleksei Glazyrin
Rating: 4/5
"Spirit of Evil" is based on a short story by Nikolai Gogol, who claims he told is as he heard it, as a Russian/Ukrainian fairy-tale. The same story was filmed a few years earlier by Mario Bava as  "La maschera del demonio" (also known as "Black Sunday" or "Mask of Satan"), although it's true that Bava changed it a lot. Now, I have a weakness for supernatural thrillers/horrors/fantasy and "Viy"/"Spirit of Evil" was, as far as I'm concerned, an almost perfect example of the genre.
The main character is Khoma Brutus a young man studying to be a priest. After an strange encounter with an old witch that in the morning turns into a beautiful young lady, he is summoned by a local nobleman to pray for the soul of his recently-deceased daughter, who - obviously - turns out to look exactly like the old with after her transformation. Thus, Khoma will spend three horror-filled nights, in a small church, alone with the possessed body of the young woman. 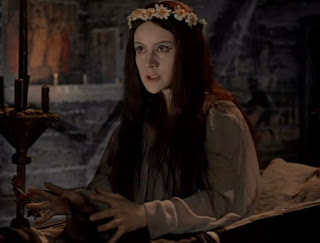 "Spirit of Evil" has three qualities that make it more than just a regular fairy-tale movie (I'm not going to talk about the awesome cinematography or the perfect score). The first one is its ambiguity. While in other supernatural movies the filmmakers tend to explain stuff a lot (as it's the case with "La maschera del demonio"), Georgi Kropachyov and Konstantin Yershov don't bother too much to let us know why the witch does what she does, what is the priest's motivation etc., they just take us for the ride and the ambiguity and the ensuing unpredictability of the story is what makes it great. Secondly, Khoma Brutus (played by Leonid Kuravlyov) is a unique character. Although he's technically a priest (or about to be one), he is not a moral, courageous man. On the contrary, he enjoys getting drunk, being lazy and he tries to escape his duty with every opportunity. He's also a coward. And thus, we reach the third quality of the film: its humor. Khoma's day-time shenanigans are funny in a way only Russian films can be and they serve a a good counterpoint to the creepy nights he spends in the church. 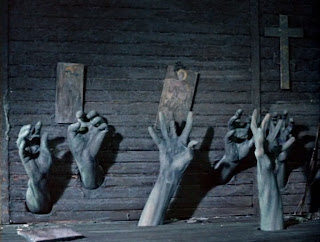 And while we're at it, let's talk about the horror aspect of the movie (this is, famously, the first Sovier horror). While I can't say this movie has many scares, there is a sense of peril and fear that dominates our main character and transfers on the viewer. There are several sequences in which this anticipation combined with a surprise factor (we don't actually know what's going to happen, but we know something will go wrong) and visual invention creates a very strange, creepy and alluring effect: there's the moment at the beginning when  the old witch uses Khoma as a broom and flies across the fields and the three nights, all of which witness the vampire-like resurrection of the dead girl and her trying to corrupt the priest, but especially the last one, when the witch summons all the evil spirits, including vampires, werewolves, huge hands that crawl out of the church walls and the (quite disappointing) monster Viy, the leader of the trolls in Russian folklore.
There aren't many movies that mix together the picturesque rural Russia with the visuals of full-on Gothic horror, folklore with satire, joie de vivre with chills and thrills as well as "Spirit of Evil" does.
Posted by Victor at 10:59 PM